It’s sad when you look at your pay stub and see the disparity between your gross and net pay. That beautiful gross figure gets whittled away by so many deductions like Federal tax, Medicare tax, FICA, 401K contributions (if you participate in this), and of course, health insurance premiums.

But is a high-deductible plan really a good idea? 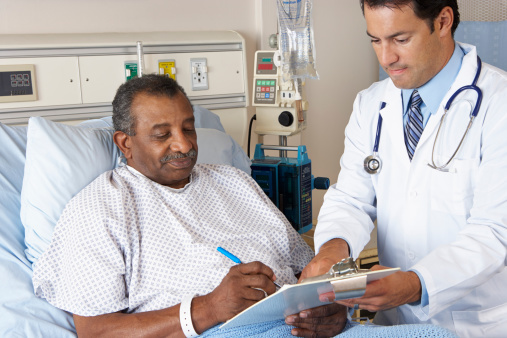 High deductible plans have their good points, but they’re not ideal for the frequently hospitalized

High-Deductible Defined
A High-Deductible Health Plan, or HDHP for short, is health insurance coverage that puts a larger deductible on the customer than a regular insurance plan does. Furthermore, it comes with a maximum limit on the sum of the annual deductible and out-of-pocket medical expenses, the latter which covers things like co-pays, but not the actual premium costs, which in turn are less than those of a regular plan.

HDHP’s also may provide preventative care either with no deductible or with a deductible that comes in under the annual minimum. Preventative care is defined as things like routine prenatal and well-child care, adult and child immunizations, screening services, tobacco cessation or obesity weight loss programs, periodic health evaluations (e.g. annual physicals). The likelihood of this coverage has increased thanks to the Affordable Care Act.

Many HDHPs work in tandem with a Health Savings Account (HSA). This is an account that beneficiaries can bank, tax-free, funds ranging from about $3,000 to $6,000, against future medical costs.

HDHP’s Increased Popularity
According to the article “The Problem with High Deductible Health Plans”, HDHPs are becoming more popular, especially among large corporations that are trying to offset rising health costs while remaining in compliance with the Affordable Care Act.

Additionally, a recent Bankrate.com report says that more than four in ten Americans prefer a high-deductible plan as a means of lessening the pain of a plundered paycheck.

One of the apparent results of increased HDHP enrollment is that it makes people think twice about going to the emergency room for minor things like a cough or a slightly twisted ankle. This in turn alleviates some of the over-crowding that plagues many emergency rooms, which in turn helps hospitals to keep costs down.

The Downsides
So HDHPs are touted as this big money saver that means smaller payroll deductions and cheaper operating costs for hospitals. If that’s the case, then why haven’t people flocked to HDHPs and abandoned traditional health plans en masse? Perhaps because …

It’s A Killer For Chronic Condition Sufferers. If you require frequent hospitalization and/or medical treatments, then you are paying that deductible cost every year. And that’s assuming that you are the only one in your family getting sick that year. If multiple people require medical care, you could conceivably end up paying over $10,000 during any given year.

It’s Luck-Dependent. Even if you’re in the peak of health and have a family medical history that the average person would kill for, accidents do happen. For instance, someone who gets in a car accident and ends up in the hospital may face the prospect of physical therapy. Since the road to full recovery can span many months, such a person runs the risk of having successive years of making high deductible payments.

It’s Unsuitable For Lower Income Families. The whole point of health insurance is to help absorb medical costs that people could otherwise not handle. With an HDHP, the patient must pay the costs up front until the annual deductible limit is reached. Families that are experiencing tough economic times will be hard-pressed to suddenly come up with as much as $6000 to handle a medical emergency.

Making A Bad Care Decision. Consider someone who uses an HDHP and who one day experiences a slight twinge of pain in their stomach. They realize that if they make an appointment with their doctor for what seems like a minor symptom, they’re going to have to pay for it completely out of pocket, so they decide not to go, relying instead on the time-honored tactic of “ignore it, and maybe it will go away”. But it turns out that the pain doesn’t go away. In fact, it’s something which, if caught at the outset, could have been easily treated. Having an HDHP means feeling obliged to make decisions like this every time an ache, pain, or mysterious rash develops.

So Is It Worth It?
Is a High-Deductible Health Plan right for you? It all comes down to the insured’s particular circumstances. People who are in excellent health, don’t usually require medical services, and have a good income as well as money socked away for emergencies, and can stand to benefit greatly from an HDHP. For everyone else, the people who are struggling to make ends meet and have family members (especially kids) who somehow end up at the doctors or the hospital with alarming regularity, the traditional health insurance option is best.

For some extra insights, read the article “How Health Insurance Plays A Role In Your Personal Financial Plan“.

—
John Terra has been a freelance writer since 1985. He is an unabashed, enthusiastic supporter of the higher premium-lower deductible insurance plans.